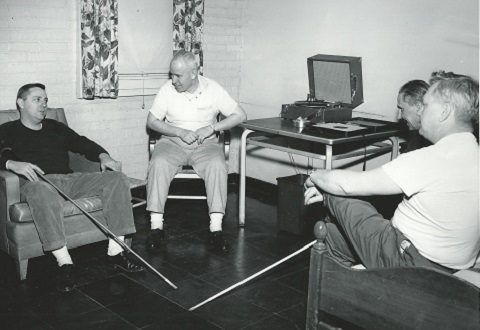 Patients in the recreation room after hours socializing at the first Blind Rehabilitation Center, Hines VA Hospital in Chicago.

The year was 1947 - Jackie Robinson joined the Brooklyn Dodgers, the Dead Sea Scrolls were discovered at Qumran, a Hollywood "blacklist" was developed by the House Un-American Activities Committee, Chuck Yeager broke the sound barrier piloting a rocket-powered Bell X-1 plane, the Marshall Plan was proposed to help European nations recover from World War II, and Anne Frank's diary was published.

Harry Truman signed a Presidential order in 1947 turning the military's blind rehabilitation training of Servicemembers over to the VA, as a part of preparing the nation for post-war adjustment.  Previously, in 1944, President Roosevelt had made an extraordinary commitment to blinded Servicemembers with an order declaring "no blinded servicemen from WWII would be returned to their homes without adequate training to meet the problems of necessity imposed upon them by their blindness."

With the conclusion of WWII and the probability of deactivation of the military blind rehabilitation program, a debate ensued about where and how treatment of the 1,400 war-blinded Veterans would take place.  President Truman settled the debate with his 1947 order, and responsibility for the adjustment training of those blinded during WWII was transferred to VA.

Hines VA Hospital in Chicago was selected as the first center site, due in part to its large and well-functioning physical medicine and rehabilitation department.  In 1948, Russell C. (Russ) Williams, a WWII blinded Veteran and former counselor at the Valley Forge program, was appointed Chief.  After four months of intensive staff training, the nine-bed unit admitted the first patient on Independence Day, 1948. Williams, a former patient of the Valley Forge and Old Farms blind rehabilitation programs, provided expert leadership in developing a model program; he had an unshakable faith in the capabilities of blinded Veterans.

This new program, a locus of talented leaders and staff, spawned the development of techniques and devices that formed the foundation of training for blind Veterans.  The techniques for training in the use of a long white cane were transferred and refined, blind Veterans were taught techniques for reading, writing, taking care of their daily needs and living quarters and prosthetic devices were provided that enhanced their independence.  First Army, then VA began partnering with guide dog schools to assure that blinded Servicemembers and Veterans could experience a more independent lifestyle with a well-trained guide dog.

More than Canes and Guide Dogs

Today, VA supports 13 inpatient blind rehabilitation centers across the US.  These centers provide a breadth and depth of intensive and supportive care that restores abilities of Veterans and Servicemembers to achieve their independence, support their families, care for their homes, and integrate into their communities.

Blind rehabilitation training takes many forms, depending on the Veteran's goals and interests.  She or he can learn to orient to the environment, move safely and confidently with a human guide, long cane or guide dog, and take public transportation.  Some of the other skills that are taught include reading, writing, and personal finance management, cooking, cleaning, organizing, personal grooming, taking care of the home, children and aging parents, lawn care, household repair, hobbies and crafts, woodworking, small engine repair and maintenance, and pet care.  Devices and technology that support independence are provided and incorporated into the rehabilitation, such as computers, mobile computing devices, smart phones, global positioning devices, etc.  Job and education goals are addressed in the centers, and Veterans are referred for vocational and college-readiness training if necessary.  Blind Rehabilitation Specialists work closely with optometrists who provide eye and vision examinations and prescribe optical devices that enhance Veterans' remaining vision.

A physician or nurse practitioner is assigned to the center to conduct admission examinations, write orders, assure medications are used correctly, and provide medical care if needed during the Veteran's stay at the program.  Rehabilitation nurses monitor medical issues, educate about disease management such as diabetes, nutrition monitoring, provide support for smoking cessation and weight control, provide education for medication management and use of medical devices such as talking glucometer and blood pressure machine, and audible prescription reading devices.

Centers also employ psychologists and social workers to monitor well-being and learning style, to assure Veterans' emotional health, and to assist instructors in best approaches for training.  Social workers coordinate family training programs, gather resources for discharge planning and ensure that there are no social needs that will interfere with the success of rehabilitation.  Chaplains may provide spiritual care for blind Veterans; chaplains represent many faith groups and minister to Veterans in their preferred religious traditions, as well as to those who do not profess faith.

Veterans' peer experiences may be the most important aspect of adjustment to blindness.  Learning, living, working, and enjoying recreation experiences with other blind Veterans are often the best memories of inpatient care.

(With thanks to Denise Van Koevering, Chief, Hines BRC, for access to archives.)