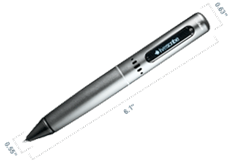 The Livescribe Pulse smartpen is a pen that records audio while taking handwritten notes and links the notes to the audio content using an camera on the pen and a dot pattern on the special-purpose Livescribe paper. The pen's single-line LED screen offers menu feedback and a playback timeline.

The smartpen has three audio-sensitivity settings: automatic, lecture hall and conference room. Depending on the situation users can choose the appropriate setting. The smartpen does a remarkable job of picking up sounds in even the most difficult situations. One downside is that users might pick up the scraping sound of the pen dragging on the paper; but this generally isn't distracting and won't hinder the user's ability to discern who was talking or what they were saying. The standout feature of the Pulse Smartpen is that it keeps the audio and your notes in sync. Placing the nib of the smartpen at any point of the notes will cause the corresponding audio to play through the pen's speaker, allowing the user to retrieve the context for his or her written notes.

The smartpen has the ability to capture 100 hours of audio (on the 2GB version ). Livescribe Desktop software supports copying both the recorded audio and the visual notes to a computer. This relatively basic application manages the firmware of the pen and all the data you collect. The Livescribe Desktop software can download written notes and audio into "sessions." The software can manage multiple pens and notebooks. Selecting one of your notebooks in the Page views brings up thumbnail views of all the pages in the notebook. A double click brings the page into full view, and a zoom slider bar allows for zooming in on any part of the page. The image-capture verity is near perfect. All text starts as pale green and fills in as dark green during audio playback. You can click on any part of the written notes to hear the corresponding audio.

Every Smartpen user gets 500MB of free storage at Livescribe Online. In addition to storage, there's a community where users can post pages they've written or drawn, and people can comment on their work.

Though the device was not specifically designed as assistive technology for cognition, it can be used as an external memory aid to record knowledge and improve prospective memory functioning. The smartpen has the advantage of being minimally intrusive, and facilitates the activity of note taking without requiring the intervention of another individual as a dedicated note taker. The smartpen thereby provides an opportunity for inclusion within an educational or vocational setting.

The long-term successes of the individual using the device will depend on reviewing and archiving the note-taking content and developing prospective lists for each day's activities. Some users may be able to perform these activities independently, while others will need support from a personal assistant.

This device is indicated for individuals with mild cognitive disabilities, limited motor speed or even motoric abilities. However it still allows a note taker to take notes and allows alternate computer access to manipulate the information. The key to utilizing the device is the ability to learn the process for recording and replaying handwritten text and audio.  Specifically, the individuals need to learn to enter information, review information and delete information.

This device is not indicated for individuals who cannot learn the process for recording / playing the audio, and who cannot maintain the device (e.g. charge battery, sync notes with a computer, archive notebooks).  The device is not indicated for individuals who have difficulty with fine-motor control as this is required to access the start/stop/pause controls on the dot paper as well as to manipulate the pen (if the user is independently making notes).  The device is not recommended for individuals with decreased visual acuity as there are visual demands related to writing with the pen, finding a location to place the pen for playback, and using functions that require the small screen built into the smartpen. Literacy is not a requirement as the user could associate recorded audio with pictures rather than written notes.  The device is not recommended for people with auditory impairments which would prevent them from hearing the audio playback.  The device is not indicated as a stand-alone prospective memory aid for users with impaired self-initiation who will require cuing or alarms, although it might be used for other purposes for these individuals or for prospective memory needs in conjunction with a second cueing device.

Affordability: The Livescribe Pulse is very affordable at a retail price of $129.95, primarily due to the fact that it is designed for the consumer electronics market.  The Pulse is the least expensive of the current line of smartpens which include the 4GB Echo at $169.95 and the 8GB Echo at $199.95.  Operating cost of the consumable items in the regular use of Livescribe Pulse mainly involve the dot papers and the ink cartridges. A dot paper notebook can cost anywhere from $7.95 to $24.95 and the style of the notebook. Ink cartridges of 5 tips cost about $5.95 and are available in blue, red, and black colors. There is a customized recording headset available for the Livescribe Pulse which can give better voice recording quality and costs $29.95.

Consumer Repairability: The Pulse must be sent back to the manufacturer if it needs repair.  The warranty for the Pulse is 1-year.

Durability: The Pulse is relatively dependable.  It is as dependable as other pens of similar size.  The only concern in terms of the overall design is the placement of the pen tip and the Infrared Camera.  A potential problem could be due to the placement of the pen tip because it could break off when it is not in the case.  Furthermore, the IR camera could fail to work if the device is dropped as it is an electronic device.

Ease of Assembly: The packaging of the Pulse is typical for a consumer electronics device.  An individual must have fine motor control of their upper extremities in order to open the package.  The packaging includes an easy-to-use start-up guide.  In order to utilize the full functionality of the device, the Livescribe Desktop software must be downloaded from the internet and installed on a personal computer (Windows or Mac compatible).

Ease of Maintenance: The Pulse is easy to maintain on a daily basis.  The Pulse can either be connected to a computer on a regular basis via the docking system in to recharge the batteries or used with an external charger. The duration of the charge will depend on the utilization of the microphone and speaker. Charging the device on a regular basis may be difficult for individuals with memory deficits. The ink cartridges must be replaced when the ink run's out.  This may be difficult for individuals with poor fine motor control of their upper extremity. The notebooks must be archived on a regular basis in order to prevent cross-linking of old/new text and audio.

Effectiveness: The Pulse facilitates the memory of individuals, and provides multiple modes for recording and replaying handwritten notes along with audio content.

Flexibility: The device is very flexible given the use of short-cuts to perform tasks, the ability to use the pen as a free-standing note taking device or use the pen in conjunction with the desktop software.  Furthermore, the pen allows for infinite creativity when utilizing the pen and dot paper.

Learnability: Given that the device was designed for the general population, it is easy to learn how to use the basic functions.  It requires training and/or reviewing the user's guide in order to take advantage of the majority of the device features. For individuals with cognitive impairments, the device will require training, specifically to remember to turn the recording feature on/off.

Personal Acceptability: The pulse is very acceptable given it is a pen and paper application.  The only aspect that makes the device stand-out is the size of the pen as it is slightly larger than a typical pen.

Physical Comfort: The device does not increase discomfort any more than a standard pen.

Portability: The device is extremely portable given the size of the device and the notebook.  This is one of its best attributes.  In terms of docking the Pulse with other computers, the dock must be shifted from one computer to another and the Livescribe Desktop software must be installed. It is best to charge the device daily for optimal use .

Supplier Repairability: The Pulse must be returned to the manufacturer for repair or a new device must be purchased to replace a broken device.  However, if a device must be repaired/replaced the notes and audio will not be lost as long as the device is docked to a computer on a regular basis.