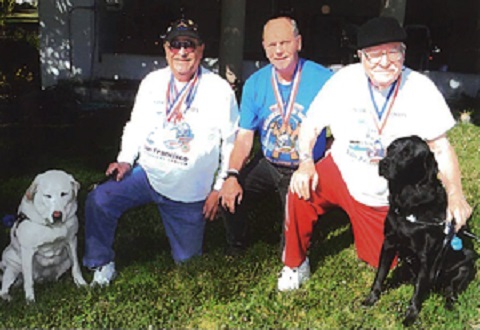 Since early time, dogs have displayed a talent for cooperation with humans - research suggests that humans' evolutionary fitness was due to dogs.  The early partnership between humans and dogs was manifested by cooperative hunting, transporting goods and guarding. Dogs would partner to identify, track and bring down prey, and would also work as beasts of burden and guards, alerting their humans to intruders.  Paleolithic dogs were big – reportedly about the size of German Shepherds. With dogs, hunting, moving camps and staying alive were easier; humans were freed to pursue other endeavors that benefitted their communities.

There is very early evidence that dogs partnered with people who were blind; cave excavations in Pompeii and early Chinese scrolls depict dogs leading blind people.  Efforts to train dogs as partners for people who are blind began early, too – the first written description of a systematic method of guide dog training was authored in Vienna in 1819. The real breakthrough for guide dogs in the US, however, came as a result of a 1927 article in the Saturday Evening Post by Dorothy Eustis, a wealthy dog breeder in Switzerland.   In the article, she enthusiastically described a training program for guide dogs she had toured in Potsdam, Germany.  Of all the correspondence she received from the US about the article, she responded to Morris Frank, a young blind man, who wrote to Dorothy Eustis and asked her to train a dog for him.  Morris and “Buddy” a female German Shepherd, were an immediate and sensational success – winning the support of skeptical journalists.  Morris Frank and Dorothy Eustis began a guide dog training school in Morristown, NJ in 1929.  An early video of Morris Frank and Buddy may be found here:

Seeing Eye Co-Founder, Morris Frank in his own Words
https://www.youtube.com/watch?v=gwYHXNItSks

Partnerships between war-blinded Veterans and guide dogs were recorded as early as 1899, and a concerted effort was made by the German Red Cross to train and provide dogs to war-blinded Veterans.  The US Military partnered with guide dog schools to provide guide dogs to blinded WWII Veterans, and those partnerships continued when the military blind rehabilitation programs closed and were transferred to VA.

Guide dogs are not for everyone, but for those who desire to work with dog partners, they provide blind Veterans and Servicemembers with the ability to travel independently and safely.  The dogs will travel in a straight line, even if their humans tends to veer. They will follow the commands of their humans to turn, change pace or stop.  They protect their humans from obstacles (even those that are above the dog and over their humans’ heads), alert their humans to terrain changes, and stop to let their humans understand there is an obstacle that requires a decision.  Guide dogs will “intelligently” disobey a command if following it would be dangerous to their humans, such as walking into the path of an oncoming car.  Guide dogs recognize doorways as destinations and can remember routes they travel routinely.  Guide dogs are especially good in adverse weather conditions; they are not confused by rain or wind, and don’t need to rely on landmarks that may disappear in snow.  Those who travel (and live) with guide dogs also cite the benefits of the companionship of their dogs, less tension in traveling and the social bridge that their dogs provide.

Today, the Department of Veterans Affairs supports guide dog partnerships for blind Veterans by assisting Veterans in deciding whether a guide dog would be right for them, recommending training schools that are accredited, providing support to assure that Veterans and their guide dogs are well-trained, and support working dogs with veterinary care and equipment.