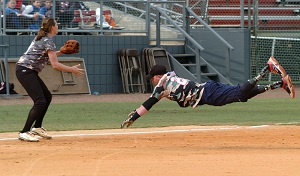 Veteran Josh Wege, a double amputee member of the Wounded Warrior Amputee Softball Team, displayed his athletic skills by using the state of the art prosthetic limbs provided by VA that enabled him to play in the 2013 Taco Bell All Star Legends & Celebrity Softball Game. Wege was named most valuable player in the game, which was nationally televised as part of Major League Baseball’s All Star Game celebrations in July.

Wege and other members of the Wounded Warrior softball team also receive care through the VA healthcare system. Through advances in technology and care as part of the Veterans Health Amputation System of Care, many amputees are now able to actively take part in other sports as well, such as skiing and surfing.