Mosul to Maine – a Journey of Trauma and Recovery 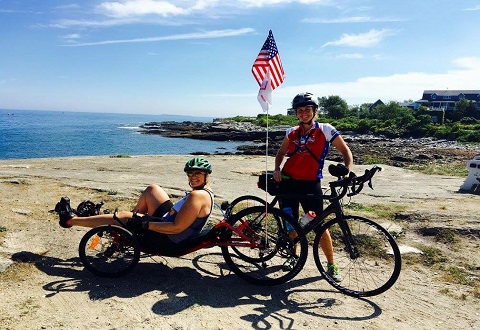 Mary Torczon and Jenn Weatherford at the Maine Lighthouse Ride

“These days, life is phenomenal” says Mary Torczon.  “Things have never been better.” However getting to this point Mary endured years of hardship, loss, and grief.

In February 2009, Mary Torczon suffered a Traumatic Brain Injury when a VBIED (Vehicle-Borne Improvised Explosive Device) exploded about 20 feet from her as she was passing near an Iraqi police checkpoint near Mosul.  In an instant, the suicide car bomb ripped through the Humvee in front of her taking the lives of her battalion commander and her two best friends.

Mary was supposed to be sitting inside the vehicle shredded by the explosion but at the last minute, her battalion commander ordered Mary to ride in the second vehicle so an interpreter could ride with him.  That decision still haunts her.

The loss of her friends and initial injuries were devastating but things continued to worsen. Four years later Mary suffered a stroke brought on by her initial TBI.  The stroke left her with Aphasia (difficulty in being able to speak) and right side weakness.  “It sucked.  It really sucked” she says.  “After all this, my fiancé of 7 years, father of my child left me - and I was alone.  I kept thinking, ‘Now what do I do!?!?’”

What Mary did was enroll in the Polytrauma Rehabilitation program at the Audie L. Murphy VAMC in San Antonio and began putting her life back together.

Dawn Phillips, Recreation Therapist at the PTRP, began working with Mary in 2015 and has helped Mary find her new path in life.  “We keep our Veterans moving and we keep them engaged - no one is alone here” says Ms. Phillips.  “Social engagement is the best medicine,”

While the PTRP provides a step in Veteran recovery it also relies on community resources to help Veterans continue their therapy.

Operation Comfort, based in San Antonio, has been collaborating with the VA to help Mary and other Veterans transition to the community.

“When I first met Mary, she needed a lot of assistance.,” said Jennifer Weatherford, Recreation Therapist with the Operation Comfort.  “I remember Mary needing help walking and especially needed help getting into the recumbent bike and getting her feet on the pedals.  Now she is amazing – she has participated in multiple bike rides in Texas with us as well as The Maine Lighthouse Ride in Portland, Maine where she completed 42 miles in 1 day.”

“Cycling got my anxiety out” says Mary. “It’s my favorite.  I can just grind away on the pedals until I feel the tension leave me.”

For those around her, the changes in physical health are obvious but thanks for Recreation Therapy Mary has also built her emotional and inner strength.

Nowadays Mary is busy with school and raising her son, still she is able to bike with Operation Comfort and spend time with other Veterans.

When asked what she would tell other Veterans about Recreation Therapy at the VA Mary gave a simple but emphatic two word reply – “Do it!”